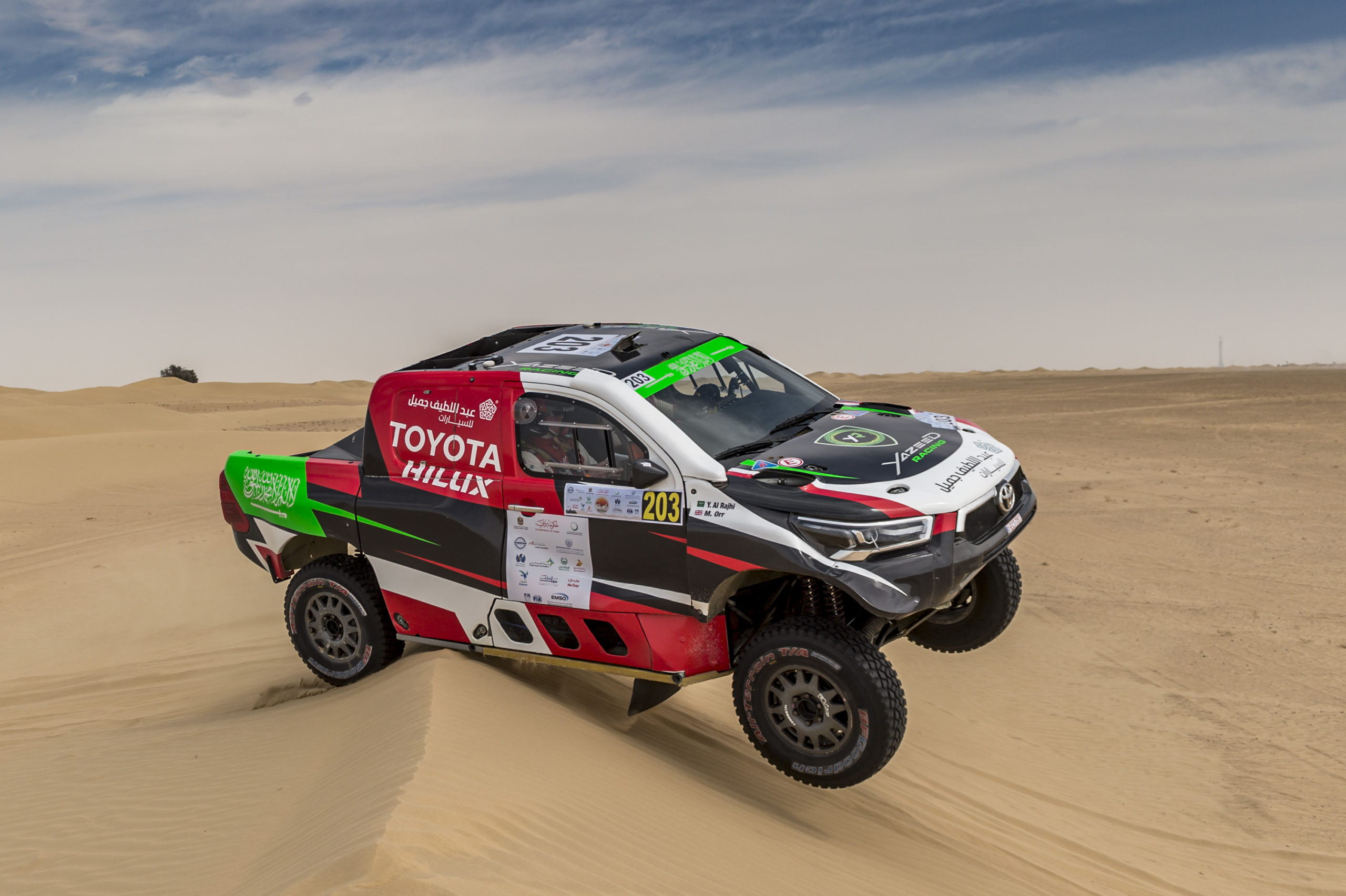 The UAE’s Khalid Al Qassimi and German Dirk Von Zitzewitz were just four seconds further adrift in third place in an Abu Dhabi Racing Peugeot 3008 DKR in the second round of the 2021 FIA World Cup for Cross Country Bajas for cars.

Ruled out last year because of the coronavirus emergency, the rally is being staged in compliance with strict COVID-19 Protocol, and it made history today as the first FIA World Cup cross-country event to be run on solar power.

Based at DEWA’s Innovation Centre located at the Mohammed Bin Rashid Al Maktoum Solar Park, the event provided a challenging first leg test for drivers and riders on a 192km passage through the dunes and plains of the Al Qudra desert.

With Al Rajhi taking charge of DEWA’s Innovation Centre Special Stage as he chases a first cars victory in the event, France’s Pierre Lachaume and Loic Minaudier in a PH Sport Zephyr, Pavel Lebedev and Kiril Shubin in a CAN AM Maverick and Claude Fournier with Szymon Gospodqrczyk, also in a CAN AM Maverick, completed the top six.

were winning the race for the T4 title.

Top-seeded Honda rider Mare, returning to action after a 2019 Dakar Rally crash, produced another impressive display as he moved into a 2 mins 20 secs first leg bikes lead over fellow countryman and 2017 winner Mark Ackerman on a Husqvarna, with British KTM rider Sam Smith in third.

The UAE’s Sultan Al Balooshi on a Husqvarna, Jordanian Abdallah Abuaisheh riding a KTM and the UAE’s 2018 winner and World Cup champion Mohammed Al Balooshi on another Husqvarna completed the top six in the opening round of this year’s FIM Bajas World Cup.

Emirati Mansoor Al Suwaidi on a Yamaha YFZ 450 R was a runaway leader of the quads category with a huge lead of 1hr 38 mins 10 secs from Saudi Haitham Al Tuwayjiri on another Yamaha.

“It feels good to welcome back World Cup cross country rallying, especially as we’re setting an example for other events to follow in sustainable motor sport development,” said Mohammed Ben Sulayem, President of the Emirates Motorsports Organization and FIA Vice President for Sport.

Al Rajhi reached the end of the stage to say: “It was a good day and we drove fast, with Michael doing a good job. We had some technical issues at around 30km and later a puncture. But a good day. And good to have Michael back.”

Al Qassimi said: “The first 20km the car was hesitant on the dunes. We tried different ways but kept getting stuck. Because there has been no rain the sand is very soft so we tried to avoid the dunes as much as possible.”

Mare completed today’s leg to say: “It was good stage, pretty technical in places and some very fast straight flats. This has been my first since crashing in the 2019 Dakar. Since then I have had surgery and been focusing on getting fit.”

The event had started without the top-seeded driver and co-driver combination of Denis Krotov and Konstantin Zhiltsov who arrived in Dubai only for their Mini John Cooper Works Rally to be held up by customs formalities in Saudi Arabia following the Dakar Rally.

Among the early casualties were the UAE’s Yahya Al Helei and Khalid Al Kendi whose Nissan Pick Up went out of the rally with mechanical problems. The surviving drivers and riders next tackle Saturday’s 194 kms Arabian Automobiles Nissan Special Stage which leads to the podium and prizegiving at the Innovation Centre at 5.15pm.

He was thoroughly checked out by a doctor for his eyesight, balance and mobility along with a physical inspection to his head and upper body after a crash on the stage. He said: “It was a small crash but I bumped my head. After this rest at the finish I now feel good.”

“It was really good, I enjoyed the course and I am feeling pretty fit and strong and was able to catch quite a few riders. Nobody passed me. Really good to be back racing in a high profile event like the Dubai Baja.”

“It was a good stage with good organization. I did lose time, mostly on the fast flat sections, so I need to change the set-up of the bike for tomorrow. Today was the first time on this bike.”

“A great day and really good riding again. I feel good and I am looking forward to tomorrow. This has been my first race since 2019 and it is great to be back racing.”

“It was a good stage. Nice terrain and fast – typical Dubai Baja. I lost some time at the refuelling and after that I was caught by Sam (Smith) and Arunas (Gelazninkas). We stayed together and made good time. Then at around 30km from the finish, Arunas had a big crash. I stopped to help him. I stayed with him until he felt better. I fixed his bike and when he was able to ride, albeit slowly, I was able to race on.”

“The course was amazing and so much fun for my first rally on this type of bike. It is very heavy and it took me several Kms to get the feel of it and confidence on the sand.”

“Not easy. We had problems at the start with the turbo, so no boost. Will need to fix this for tomorrow. Also the terrain was very soft and hard to travel across with very low torque.”

“A very good day. The dunes were good and Loic did a perfect job navigating. We had no problem with the soft sand, this car is perfect.”

“It was good and fast in some sections. The soft sand made it difficult in places.”

“It was fast and difficult at times. The sand was soft and this made the dunes difficult. The car is running well.” 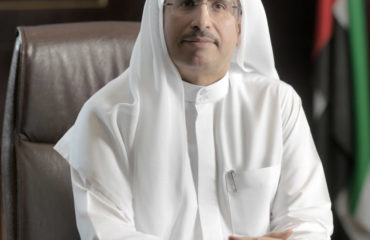 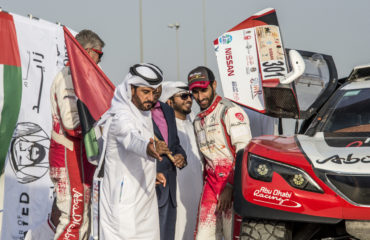 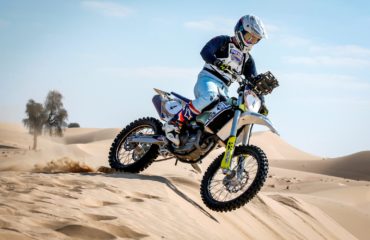